The valley Lumnezia is one of the core areas of the Romansh in Switzerland. There is said to be 60.000 Romansh speaking Swiss, though only half of them note Romansh as their "first language". For many years, being Romansh meant being a poor peasant with little schooling. The feeling of inferiority still haunts the Romansh even in their own regions, being that many German speaking people take residence and neglect to learn Romansh. Even in Lumnezia with 90% Romansh speaking inhabitants, bilingual communication is usual, practically weakening the mother tongue through language switching and lack of usage in the public sphere. La Fundaziun da cultura Lumnezia seeks to sustain activities that preserve/develop the history, language, architecture, traditions and rituals of the local community.

The word crap is one of the oldest, pre-roman words in the Romansh language, crappa is the innumerable plural. The 2017 exhibition crappa | Steine in Casa d'Angel by guest curator and artist H.R.Fricker was based entirely on participation. While his scope was to examine the local relation to natural stones in and around houses, the inhabitants of the valley were invited to bring stones: natural stones they had found and carried home themselves, non-manipulated stones and non-precious minerals. The stone lenders were not only obliged to bring the stone in the Casa d'Angel (to secure their motivation and increase the acceptance of the institution founded only in 2015), they were also invited to tell the story of their stone(s): where and under what circumstances was it found, why did they carry it home, where do they keep it at home?

Ninety people participated and a few stones even had to be retrieved at the homes of elderly or ill persons who insisted on participating. The stones were then placed on low wooden blocks in the five rooms of the Casa d'Angel and next to the wood were placed the identification cards containing the name of the finder and place as well as their story reduced to a few sentences, once in Romansh and once in German. The stones were all singularly photographed and edited in a booklet, which was given to the participants when they retrieved their stones at the end of the season. H.R.Fricker also toured the valley taking photos of public squares and private gardens, showing the vast amount of stones used in walls or shrubberies etc. He then created a competition, where visitors could try to couple silhouettes on a piece of paper with the stones on the photos. More than ¼ of the visitors participated in this competition.

The accompanying events (more than 20 guides, workshops, concerts and lectures) were focused on stones. Guided tours by local stone masons and artists let the audience gain access to private workshops and hands-on explanations on the handling of stone. An archeologist lectured on Stone Age tools and let the audience try to make fire or handle the tools. A linguist lectured in Romansh on the word crappa and then everybody was invited to sing 'stone'-songs with a local ensemble. 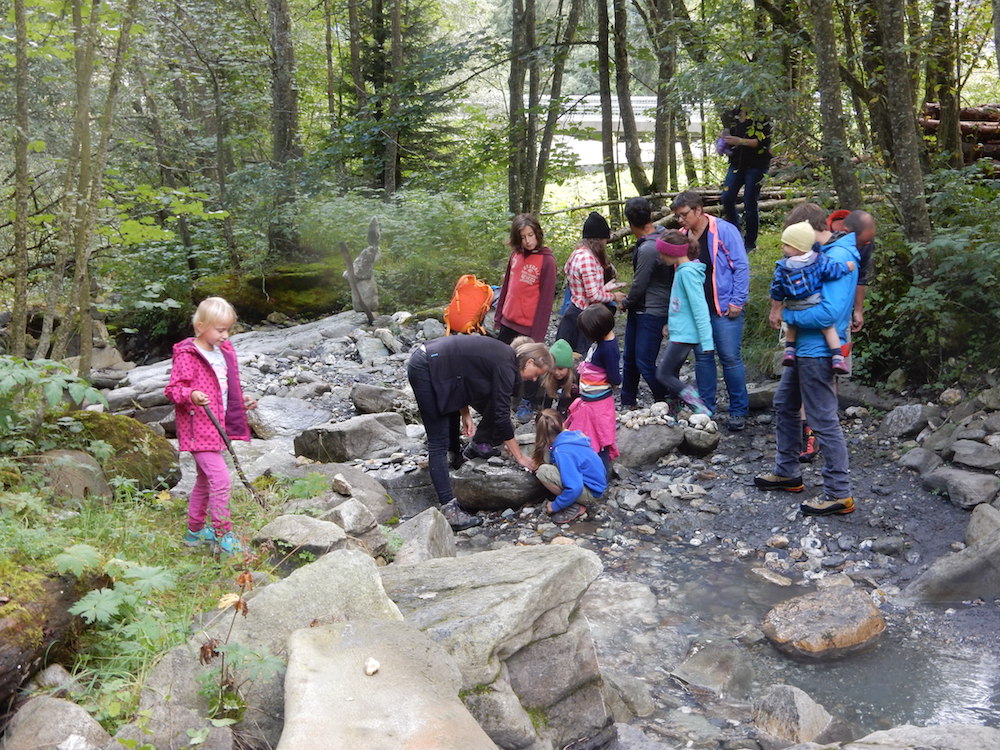 The exhibition crappa | Steine was based entirely on participation. The inhabitants of the valley were invited to bring stones: natural stones they had found and carried home themselves, and they were invited to tell their story of how, when and where they found the stone in their preferred language. This was then translated, so that every story was published in Romansh and German. Ninety persons, young and old, locals and steady guests participated, which is quite impressive for a small valley of 2500 inhabitants.

Whenever possible and relevant for the accompanying program, local artists, musicians or Romansh speaking lecturers were invited to perform. Lectures and guided tours in Romansh were introduced. The accompanying program for schools and children also focused on participation: a local intermediator of art organized two workshops seeking and working creatively with stones. Two stone lenders - a boy of 12 years and his grandfather - were persuaded to conduct guided tours for children in the Casa d'Angel, telling their stories and legends about stones. During the school visits, children who had brought a stone were also allowed to show it to their class mates.

The theme of the exhibition, stones, is all around this mountain valley and has always played an important role as a natural source for building. When reading the legends, many stories tell about the Devil carrying giant stones to stop the Christians building more churches (and one rather immoral one about a lonely miller making a puppet girlfriend who makes the millstones mill too fast). The Lumnezians clearly gather and "expose" stones in and around their houses. Many go looking for minerals (cavacristallas) or tend to carry stones up or down the mountains, either in memory of the hike, for decoration of their homes - or to build "stone men" on the mountain tops. The only object permanently exhibited in the Casa d'Angel is one of the mightiest groups of crystals found in Europe, il cristagl dil Péz Regina, found by two local cavacristallas in the year 2000.

Now comparing this culture with the far eastern culture of Suiseki or even with the experiences made by the curator in urban areas of Switzerland, specific features started to show. More people chose to participate and the stones were generally bigger than in urban surroundings, and photographs from gardens and public spaces showed a high frequency of natural and local stones used for practical or decorative reasons.

Anne-Louise Joël, born 1977 in Odense (DK) Master of Arts in History and Science of Religion from the Universities of Aarhus (DK) and Zürich (CH). Since 2014 managing director of the Fundaziun da cultura Lumnezia and daily manager of the Casa d'Angel in the Val Lumnezia, canton Grissons (CH). A certified tour guide and a passionate storyteller, she also engages in the intermediation of the local culture to tourists during the summer and winter seasons.